Create your Summer Postcard and you can win the ultimate Alienware gaming setup!

One Grand Prize winner will win: 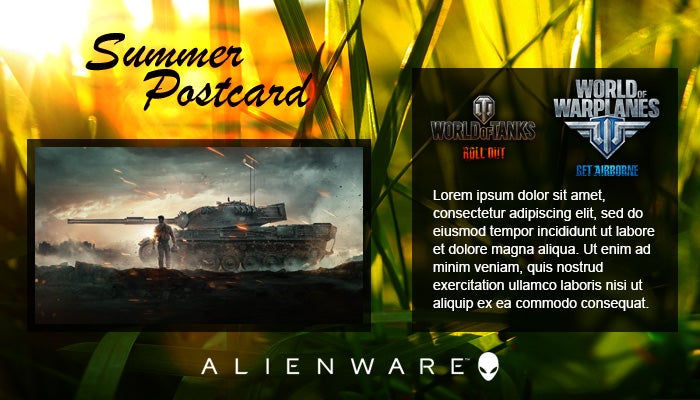 Winners will be selected based on the following Judging Criteria.

NO PURCHASE NECESSARY.  VOID WHERE PROHIBITED.

Official Rules
This contest has ended. You may still like the images, but your vote will not count for the contest.

Create your Summer Postcard and you can win the ultimate Alienware gaming setup!

One Grand Prize winner will win:

Winners will be selected based on the following Judging Criteria.

NO PURCHASE NECESSARY.  VOID WHERE PROHIBITED.

The voting period has not opened yet. Please check back May 21, 2022 to view and vote on entries.

No winners have been selected yet. Please check back later.

No Purchase Necessary. A Purchase or Payment Will Not Increase Your Chances of Winning.

These rules (“Official Rules”) set forth the rules of the Alienware Arena Wargaming Summer Postcard Contest (the “Contest”). iGames, Inc. (“Sponsor”) is the sponsor of the Contest.

1.             Eligibility.    This skill based Contest is open only to legal residents of Canada the and the United States that are 13, years of age or older, and residents of Australia, France, Germany, New Zealand and the United Kingdom who are 16 years of age or older as of August 9, 2018 (“Entrants”).  Entrants may be required to show proof of age and residence.  For Entrants under the legal age of majority, you are required to obtain consent from a parent or legal guardian to participate in the Contest and the parent or legal guardian may be required to verify the granting of consent and/or sign a release at the discretion of the Sponsor.  Failure of an Entrant’s parent or legal guardian to verify consent and/or sign a release will invalidate an Entrant’s Entry.  IF YOU DO NOT SATISFY THESE REQUIREMENTS, YOU ARE NOT ELIGIBLE TO REGISTER AND/OR PARTICIPATE IN THE CONTEST. All Entrants must have a valid e-mail address and it is Entrant’s responsibility to update Sponsor of any change in their e-mail address.  Participation in the Contest is subject to compliance with the requirements specified below.  Employees of Sponsor, Dell Corporation or any of their respective affiliates, subsidiaries, advertising agencies, or any other company or individual involved with the design, production, execution, or distribution of the Contest and their immediate family (spouse, parents and step-parents, siblings, and step-siblings, and children and step-children) and household members (people who share the same residence at least three months out of the year) are not eligible.

The Contest objective is to use your creative skills to create the best holiday card for your selected game, using a screenshot of your gameplay and a text caption.  Please see Section 5 for specific judging criteria and winner categories.

Please follow these steps to create your holiday card and submit your Entry:

4.  Entry Requirements:  By entering the Contest, Entrants represent and warrant that they have obtained all of the rights, licenses, and permissions in writing from any person who may have helped create the Entry (or from an appropriate parent/legal guardian if any such person(s) is considered a minor in their eligible country of residence); that his or her Entry conforms to these Official Rules, and that the Entry:  (i) is the original work of the Entrant; (ii) has not previously been submitted in any competition and has not won an award or prize of any kind; (iii) does not include trademarks, logos, or copyrighted material not owned by Entrant or material that is used without permission (including but not limited to company names, photographs, works of art, or images published on or in websites, television, movies, or other media) or that otherwise infringes or violates the rights of any third party (including but not limited to, copyrights, trademarks, patents, trade secrets, logos, contract and licensing rights, rights of publicity or privacy, moral rights (i.e., droit morale), or any other intellectual property rights); (iv) except as set forth above content of Entry is not subject to any third party agreement(s), the Sponsor will not be required to pay or incur any sums to any person or entity as a result of its use or exploitation of the idea or rights therein as contemplated in these Official Rules; (v) does not contain references to pornography, sexual or racial slurs or connotations, offensive language, obscenities or any material that is libelous or defamatory, or would be offensive to, or disparage, a group or individual including, without limitation, disparaging attitudes based on race, gender or religion;  (vi) does not promote alcohol, illegal drugs, pornography, tobacco; (vii) not promote any particular political agenda or message; (viii) does not contain any personally identifiable information about any person and ; (ix) does not disparage the Sponsor or any other person or party affiliated with the Contest.  Please review the Alienware Arena website Terms of Service and copyright infringement policy located at http://www.alienwarearena.com/legal/terms/ for more information.  Should Entrant include any personally identifiable information about him/herself in his/her Entry, Entrant acknowledges and agrees that such information may be disclosed publicly and Entrant is solely responsible for any consequences thereof. Sponsor and its agents reserve the right not to consider, and to remove, any Entry they deem, in their sole, subjective determination, to be inappropriate and/or not in compliance with these Official Rules and will not engage in any form of communication or discussion with the Entrant or anyone else about any Entry.  All Entrants hereby waive and agree not to assert any moral rights in and in connection with the Entry.  All decisions of the Contest judges are final and binding and cannot be appealed.

From September 2, 2018 – September 6, 2018, a panel of 2 expert judges will review eligible Entries to determine the following winners.

Entries will be judged based on the following Judging Criteria.

The Expert Judges will select one “Best Overall” winner from the entries.

In the event of a tie between any eligible Entries, the tie will be broken by the Entry with the highest score from the Expert Judges in the Creativity category. The decision of the expert judges will be final and binding in all matters; no Entrant will have the right to challenge the verdict and the expert judges will not engage in any conversation or explanation regarding their decision.

Prizes will be awarded as follows. All prizes are approximate retail value (“ARV”) in USD.

The grand prize winner will receive an Alienware gaming package consisting of the following:

No Entrant may request a cash equivalent for any prize.  Prizes are non-transferable and no substitution will be made except as provided herein at the Sponsor's sole discretion. Sponsor reserves the right to substitute the listed prize for one of equal or greater value if the listed prize becomes unavailable for any reason. Sponsor will pay the costs of delivery of each prize. Winners are responsible for all taxes and fees associated with prize receipt and/or use. If a winner forfeits or is disqualified for any reason, such winner is not eligible to receive their prize and the prize may be awarded to an alternate winner. The total value of all prizes is $2,399.96

7.             Notification of Winners. The Entrants selected to win a prize will be notified by mail, phone or e-mail, as determined by Sponsor within 10 days of the end of the Contest Period. Winners will be required to agree to the Certificate of Eligibility and Release (“Release”), which includes an acceptance of these Official Rules and a release of liability, to the extent permissible by law.  Entry into this Contest constitutes prize winner’s agreement to sign such document.  If required by law, the winner will be required to execute all applicable tax releases. The Release and tax release must be provided to Sponsor within ten days of notification attempt or the prize will be forfeited.  Prize may be awarded to alternate winner if any requested document is not returned by the deadline, or if prize notification or prize is returned as undeliverable.  The prize will be delivered within 45 days of winner being verified. Sponsor will not deliver a prize to any person other than the winner.

By accepting any prize, the winner consents to his/her name and country being disclosed as indicated below.

8.             Use of Information. The information collected to enter the Contest will be used to contact you if you are chosen to receive a prize. Additionally, Entrants agree that Sponsor, Dell Corporation and their agents and assignees may use his or her name, contact information (email, address, phone), alias, game account and image for marketing purposes and to administrate the Contest.   In addition, any such information may be used and disclosed as set forth in the Alienware Arena privacy policy located at http://www.alienwarearena.com/legal/privacy. Please note that by participating in the Contest and accepting these Official Rules, you acknowledge and accept the use of your data for the purposes set out above and that your personal data may be transferred, transmitted and/or stored in the United States. If you wish to request that Sponsor no longer use your information to provide you services, contact us at contact@alienwarearena.com. We will respond to your request within 30 business days. We will retain and use your information as necessary to comply with our legal obligations, resolve disputes, and enforce our agreements.

To the extent permitted by applicable law, Sponsor, Dell Corporation and each of its respective parents, affiliates, subsidiaries and advertising and promotion agencies, and all of their respective officers, directors, agents and employees will not be responsible for any of the following insofar as they are beyond their reasonable control: (a) technical failures of any kind, including, but not limited to telephone, electronic, hardware, software, network, Internet, or any other computer and communications related malfunctions or failures; (b) any Contest disruptions, injuries, losses or damages caused by events beyond the control of Sponsor with the exception of personal injury or death caused by negligence; or (c) any technical or human error such as typographical, printing, or administrative errors in any materials associated with the Contest. Unless prohibited by the applicable law, you acknowledge that the prizes will be awarded “as is” and that the Sponsor makes no warranty, guarantee or representation of any kind, expressed or implied, concerning a prize or regarding the use, value or enjoyment of the prize.

By entering the Contest, Entrants agree that Sponsor may obtain Entries that are similar or identical in theme, format or other respects to that submitted by Entrant.  Entrants expressly waive any and all claims that they may have against Sponsor based on any claim that any Entry entered into the Contest is similar or identical to their Entry.  In the event that more than one Entry with similar or identical elements is brought to Sponsor’s attention, the first such Entry received will be accepted.  Entrants further agree that Sponsor shall not have any liability to Entrants for any direct, indirect, contributory, vicarious, secondary or other infringement or protection of any copyright in or to Entrant’s Entry.

11.          Winners, Rules Request. For the name and country of the winners, visit https://na.alienwarearena.com/ucf/show/1893553 approximately September 9, 2018– September 30, 2018.  To obtain a copy of these rules send an email to contact@alienwarearena.com with your mailing address.