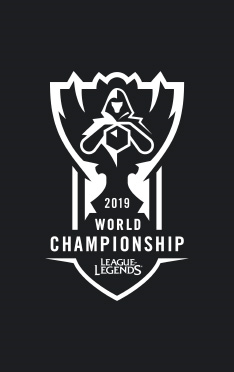 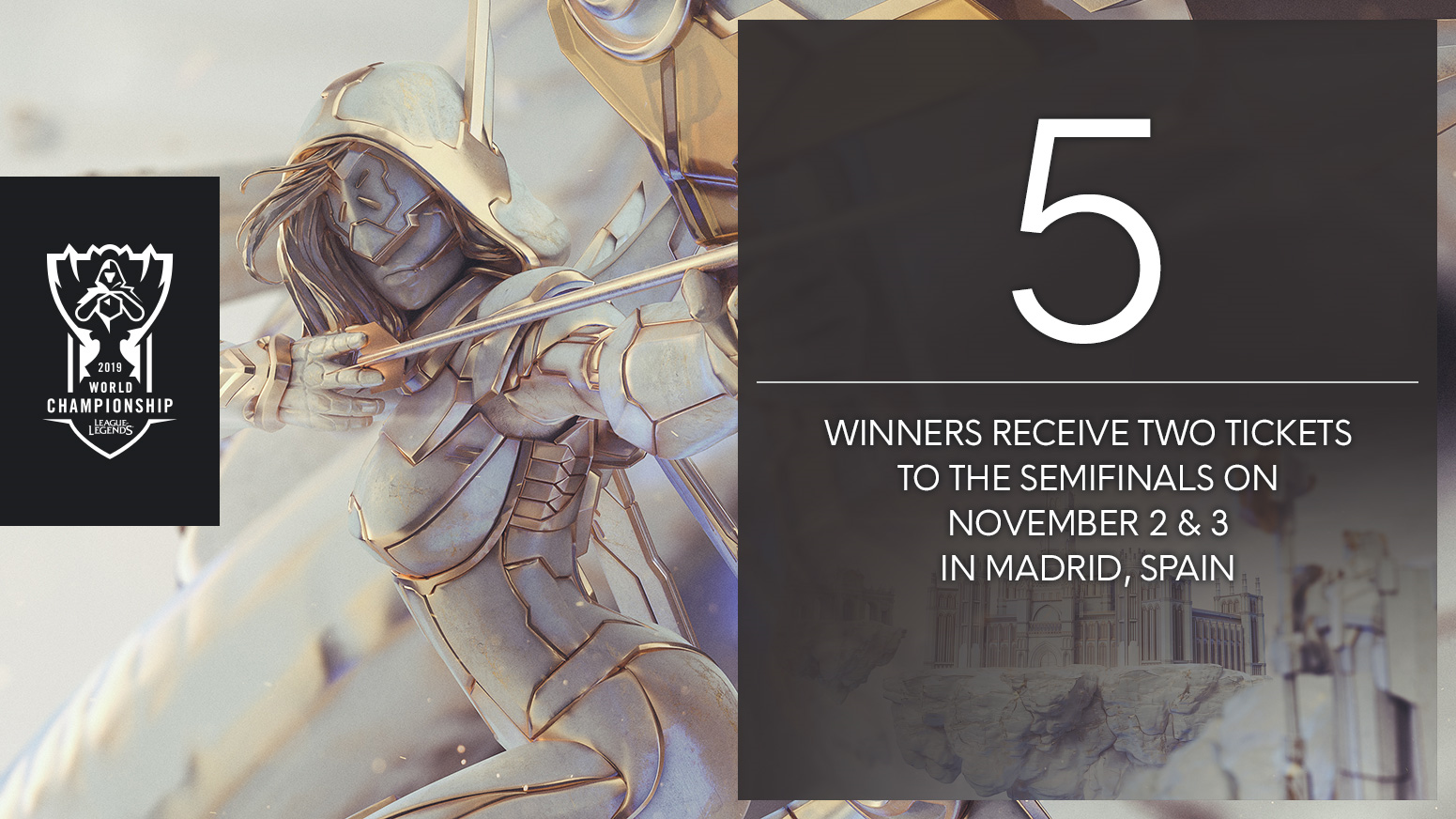 Enter to win tickets to the League of Legends World Championships

5 winners will receive two tickets to the Semifinals November 2 & 3 in Madrid, Spain

Travel, accommodations, meals or any other expenses outside of the tickets are not included and are the responsibility of the winner.

The Sweepstakes is open only to legal residents France and Germany, that are sixteen (16) years of age or older as of September 30, 2019.

No purchase or payment necessary to enter or win.

These rules (“Official Rules”) set forth the rules of the "Alienware Arena 2019 League of Legends Worlds Championship Semi-Finals Tickets Prize Draw" (the “Prize Draw”).  iGames, Inc. (“Administrator”) is the administrator of the Prize Draw.

3.  How to Enter the Prize Draw.   Each Entrant must have or create a free Alienware Arena account and may enter the Prize Draw by completing an entry form located online at https://de.alienwarearena.com/ucf/show/2087277/boards/contest-and-giveaways-eu/Sweepstakes/league-of-legends-world-championship-semifinals-tickets-prize-draw or https://fr.alienwarearena.com/ucf/show/2087277/boards/contest-and-giveaways-eu/Sweepstakes/league-of-legends-world-championship-semifinals-tickets-prize-draw.

Upon completion of the entry form, Entrant is provided one entry (“Entry”) in the Prize Draw.

The Entry provides a single submission in the drawing ("Drawing") for a prize.  Maximum of one Entry per person.  Multiple entrants are not permitted to use the same email address.  Any attempt by an entrant to obtain more than one Entry will void the Entry and the Entrant will be disqualified.

The grand prize is provided “as is” and without any warranty of any kind.  All details and other restrictions of prizes not specified in these Official Rules will be determined by Administrator in its sole discretion. All taxes (and the reporting consequences thereof) and any other fees or costs associated with the prizes described above are the sole responsibility of the winners.  No prize substitution, except as allowed by Administrator who reserves the right to offer a prize of equal or greater value.  The total approximate retail value of all prizes is €400.

5.  Drawings for the Prize.  Administrator will conduct the Drawings on or about October 8, 2019 at approximately 6:00pm CEST.

6.  Notification of Winner.  The winner will be notified by mail, phone or e-mail, as determined by Administrator within three (3) days following the Drawing.  The winner may be required to agree to the Certificate of Eligibility and Release (“Release”), which includes an acceptance of these Official Rules and a release of liability, to the extent permissible by law.  Entry into this Prize Draw constitutes prize winner’s agreement to sign such document. If required by law, the winner also will be required to execute Federal and State tax releases. Within five (5) days of notification attempt, winner must respond to Administrator with the requested documents, or the prize will be forfeited. In such a case, Administrator will choose an alternate winner by the same random method.

7.  Use of Information. The Administrator collects personal information in order to conduct the Prize Draw and may, for this purpose, disclose such information to third parties, including, but not limited to, prize suppliers and Prize Draw administrators.  Entry is conditional on providing this information.  Entrants agree that Administrator and its agents and assignees may use his or her name, contact information (email, address, phone), alias, game account and image to manage the Prize Draw.   In addition, any such information may be used and disclosed as set forth in the Alienware Arena privacy policy located at http://www.alienwarearena.com/legal/privacy.  Please note that by participating in the Prize Draw and accepting these Official Rules, you acknowledge and accept the use of your personal information and other data for the purposes set out above and it may be transferred and stored in the United States.  If you wish to request that we no longer use your information to provide you services, or to market to you, contact us at contact@alienwarearena.com. We will respond to your request within 30 business days. We will retain and use your information as necessary to comply with our legal obligations, resolve disputes, and enforce our agreements.

8.  General Release. As far as permitted by applicable law, Administrator, Dell Corporation, and each of their respective parents, affiliates, subsidiaries and advertising and promotion agencies (collectively, “Prize Draw Entities”), and all of their respective officers, directors, agents and employees will not be responsible for any of the following insofar as they are beyond their reasonable control: (a) technical failures of any kind, including, but not limited to telephone, electronic, hardware, software, network, Internet, or any other computer and communications related malfunctions or failures; (b) any Prize Draw disruptions, injuries, losses or damages caused by events beyond the control of Administrator with the exception of personal injury or death caused by negligence; or (c) any technical or human error such as typographical, printing, or administrative errors in any materials associated with the Prize Draw. Unless prohibited by the applicable law, you acknowledge that the prizes will be awarded “as is” and that the Administrator makes no warranty, guarantee or representation of any kind, expressed or implied, concerning a prize or regarding the use, value or enjoyment of the prize.

By entering the Prize Draw, Entrants agree to release, discharge, indemnify, and hold each of the Prize Draw Entities and each of their officers, directors, employees, agents and representatives harmless from and against any and all losses, damages, rights, claims, and actions of any kind arising in whole or in part, directly or indirectly, from the Prize Draw or participation in any Prize Draw-related activity, or resulting directly or indirectly, from acceptance, possession, use, or misuse of any prize awarded in connection with the Prize Draw, including without limitation personal injury, death, and/or property damage, as well as claims based on publicity rights, defamation, and/or invasion of privacy.

10.  Winner; Rules Request. For the name and country of the Winner, visit https://eu.alienwarearena.com/ucf/News  approximately October 10, 2019 – December 9, 2019.  To obtain a copy of these Official Rules, email contact@alienwarearena.com with your request, name and address.